Give me a challenge and I will do it. I started to learn to programme on my own at home when I got a new computer from my parents. I found some lectures on YouTube for iOS development and I started making things happen. I hadn’t met anyone before that was an iOS developer, I’m from a small town and nobody was doing it. It was so cool, I was learning stuff every day. Give me a challenge and I would take it, and I usually found a way!

After that I earned my Masters of Computer Science at La Trobe, where I found out about the Summer Vacation program. I thought to myself “I’ll apply and the worst that can happen is that I’ll get a rejection from Australia’s biggest telco – from there, anything else will be easy”.

I was selected out of the many applicants and started the Summer Vacation program in 2014, working in the IT Global Contact Centres team for three months as a business analyst to understand how everything worked. The team I was in reported to a General Manager who guided me through the program. It struck me how Telstra has these amazing leaders who are so intelligent and hardworking and get to balance their work and life! It made me really want to work here, so I worked really hard as a summer vacationer and was offered a place into the Graduate Program right after.

During the graduate program, I got to work on transitioning some of our big teams to our corporate Wi-Fi network. The person who led that project was determined, strong willed and who got things done. She just started giving me responsibilities and said, “Hope you can handle it!” I met her recently and she said to me “I really threw you in the deep end and you swam.” I was working with architects that had 15 – 20 years’ experience and sometimes I had to ask them to slow down and help me get to where I needed to be but they were so great and helpful.

I really appreciate the breadth and depth of work I get here – if I want to see what some technology or language does, I can find a team that does that no matter what level in the business I am. I can find someone who can guide and mentor me. Another bonus is the transparency that the business has with grads – we’ve met everyone; the CEO, his leadership team, executive directors, other senior leaders and whatever you’re interested in people are willing to take time out of their busy schedule, sit down and help you out.

This is not a place where everyone is really competitive or cut throat - instead it’s about growing and supporting each other and that’s fantastic.

It’s still surprises me but in my first rotation I worked on a project for our CEO, Andy Penn. I was in a room with four people, one of them being Andy and the other his Chief of Staff – it was amazing! And when all the grads had a session with Andy and his Chief of Staff, she said to me ‘Hi Isha, how are you?’ I was like, ‘OMG she knows who I am!’

The project was the Prime Minister’s Olympic Dinner where Andy Penn was a guest. I was one of three developers’ who formed part of the project team that developed a mobile app to be used on the evening by the 1,800 – 2,000 guests in order for them to ask questions. The dinner was to raise money for the Australian Olympic team going to Rio.

I love that I have the ability to work on such projects and didn’t even think I’d be working with the CEO, let alone in my first rotation! You never know where you’re going to go here and you never know how your work might impact the future. 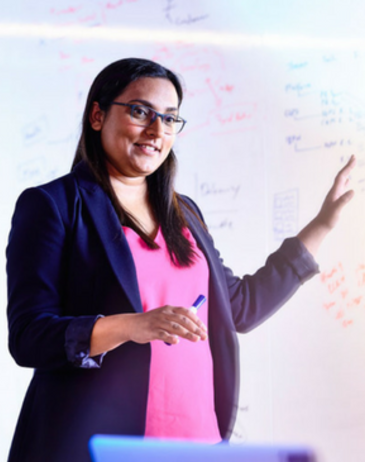