Jane Fraser, CEO of Citi Latin America, speaks with CNN Money about her role overseeing operations in 23 countries across the region, the power of diversity, and women in finance

She's one of the most powerful women in banking and she's often cited as a contender for the top post of one of Wall Street's biggest banks. But Jane Fraser, the CEO of Citigroup's Latin America operations, says she's got some work to do first.

"I look forward to seeing a woman being the first CEO of a Wall Street firm whoever that may be," Fraser tells CNN's Poppy Harlow in the latest episode of Boss Files. "I've never had the ambition to be the CEO of Citi or any other organization. Things can change over time. But at the moment, I've still got a lot to learn."

The Scottish native took over as CEO of Citigroup Latin America in 2015. She's responsible for the company's operations in 23 countries, including Mexico, and remains one of the few female executives for the region.

"When I first was put in charge of Latin America, there was some pretty negative headlines in the press of Mexico about having a female foreigner with responsibility. And this was seen as a bit of an insult in Mexico," she explains of the male-dominated corporate culture in the region.

So instead of trying to "out-machismo" the other men in the room, Fraser embraced the power of her femininity.

Her husband encouraged her to do so. "My husband took me out, he said 'We're going to buy an elegant red dress, slightly higher heels than you're used to, and a new haircut, and you're going to stride on the stage," she recalls. "He knew that if I could stride out there and be quite comfortable in who I am, and confident around that and transmitting something that was, 'I am who I am,' that that would be a benefit."

Today, women make up 51% of Citi's total employees globally, and 32% of the bank's executive and senior management in the United States.

"There aren't that many women around, and so a lot of the women want you to succeed, and they want to help you succeed in the organization," she says.

Based in Miami, Fraser was tapped to revive Citi's El Banco Nacional de Mexico, now known as Citibanamex, in 2014 as it was reeling from a money laundering and fraud investigation. Citi had acquired the Mexico branch in 2001. Mexico is now the company's largest market outside the United States, accounting for 10% of the company's revenue.

This is not the first time Fraser has been asked to help rebuild the bank's reputation. She was previously called on to help pick up the pieces from the fallout of the 2008 financial crisis. In 2013, she was named CEO of Citi's US Consumer and Commercial Banking division and CitiMortgage.

While she was in the role, Citigroup agreed to pay $7 billion to settle charges by the Department of Justice that it packaged bad mortgages during the run-up to the financial crisis.

"Earning trust back when you have had a problem has to get done the good old fashioned way. It's customer by customer, it's employee by employee," Fraser admits.

One key to a successful turnaround is empathy, Fraser tells Harlow.

"I always imagine myself at the other side of the audience, and, 'How would I like to hear things?'" Fraser says. "I like straight talking. I think transparency is important, and authenticity is important. I never like corporate speak. So, I think it's important just to say how things are."

Fraser calls her move to CitiMortgage "a leap of faith." Despite people calling her "crazy" for taking the role, she says it was the "best decision I've ever made."

She says the experience taught her that she doesn't have to know everything.

"You learn from those situations... Because it was a crisis and because I didn't know anything," she says. "You have to hire people that are better than you and more knowledgeable than you. You have to get the team to work together."

This article was originally published by CNN Business. 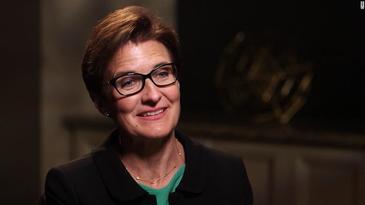