Catherine Mann, Citi’s Global Chief Economist, speaks with Bloomberg Markets about her career path and the critical importance of role models and networking

While there’s still nothing like equality in numbers with men, women are taking on prominent economic roles at major banks from Wall Street to the City of London. HSBC Global Chief Economist Janet Henry is joined at the top by Catherine Mann, who became global chief economist at Citigroup Inc. in February, and Michala Marcussen, who was named Société Générale SA’s group chief economist last year.

In that role, they make big calls, identifying trends that can form the rationale for a bank’s decisions. At a time when perceptions matter and markets cry out for explainers, women chief economists are often also a bank’s public face, presenting the institution’s take on macro developments on TV and radio as well as at gatherings such as the annual World Economic Forum in Davos, Switzerland.

Henry, Mann, and Marcussen are the first women to rise to their lofty positions at the banks they work for. That’s a measure of progress, but it also underscores just how far the banking industry has to go. Women still form a stark minority in macro­economics classrooms, a potential predictor of future gender imbalance. While the emergence of more women in key economics posts at banks marks a significant change in a male-dominated profession, it’s not a moment for wild self-congratulation in the finance industry.

Mann’s career started early, with a babysitting gig in the 1970s. As a teenager in Lexington, Mass., the budding wonk looked after a little girl whose father worked for Data Resources Inc., an economic forecasting company. He gave Mann small data-analysis jobs as a side project, and before long, she was trekking to the basement of the Baker Library at Harvard Business School in nearby Cambridge to collect housing-related numbers. She’d write them down on a big pad of paper, key the data into a teletype machine, and analyze stacks of regression output. She was hooked.

“Maybe I wasn’t such a good babysitter, but I was good at data,” says Mann, 62. “I really got an appreciation for how data helps us to understand how economies work.”

After graduating from Harvard, Mann went down the road to get her doctorate at MIT, where her thesis committee included the economist and future Nobel laureate Paul Krugman. She got her Ph.D., a job at the Federal Reserve in Washington, and then a succession of posts at the World Bank, the White House Council of Economic Advisers, and the Peterson Institute for International Economics.

“That gives you an idea of how important role models, female professors, and networking are in the profession as a whole.”

McCulloch, who’d moved to Brandeis University, helped bring Mann on board. Mann became a full professor in 2006—a big move for someone who hadn’t risen through the ranks of academia, and a rare one for a woman. Most tenured professors at top university economic departments are men: Harvard didn’t have a single tenured woman in economics until 1990.

Mann says McCulloch wanted her department to be more diverse. “That gives you an idea of how important role models, female professors, and networking are in the profession as a whole,” Mann says. “That leadership—that commitment, that one person at Brandeis—has led to a situation where there is a fifty-fifty balance at the full professor level. That’s very rare.”

Mann left Brandeis in 2014 to become chief economist at the Organization for Economic Cooperation and Development, making her the second woman in the body’s history to take on the role. About four years later, she made the jump to Citigroup.

“I’ve done an awful lot of things,” she says. “I’ve achieved quite a bit. I’m not unique to be able to do that. You have to put one foot in front of the other.” She wants to build on that: “I see my role as very similar to the role Rachel McCulloch played—as a leader, as a mentor, as making it easier for people to follow me.” 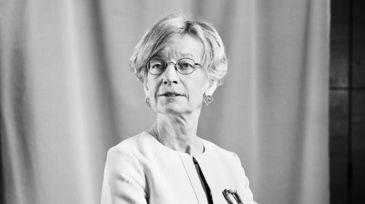