The United Nations General Assembly has declared February 11 as the International Day of Women and Girls in Science, determined to encourage more women into scientific fields.

"Unfortunately, women and girls continued to be excluded from participating fully in science," the UN said.

A report in Australia by the Office of the Chief Scientist in 2016 also found that only 16 per cent of people in the Science, Technology, Engineering and Mathematics (STEM) trained workforce were female.

In Canberra, quietly working within the community, are women with science and mathematics backgrounds doing one of the most critical jobs: keeping the power on.

Evoenergy, formerly ActewAGL, has women working across its network, managing and operating the power poles, wires and underground cables that deliver electricity, and the pipeline system that deliver natural gas.

Engineer Rebecca Beasley looks after all overhead assets including the poles and wires to ensure the supply remains reliable.

She said she always wanted to pursue a career in the STEM field and eventually did a double degree in maths and engineering.

"It's really important for women to go into these fields and they shouldn't be scared off by the fact they are male-dominated. I think it's a really rewarding field to go into," she said.

Rebecca said pursuing a career in maths and science did not always mean "slaving away at a computer". She urged girls to consider a career in engineering.

"It's something where you really feel like you're making a difference," she said.

"You really feel like you've achieved something at the end of the day and you can see the results of that," she said.

Her focus was on "just being a good engineer".

"I want to accept every opportunity that comes along, within reason, and make the most of it," she said.

Principal engineer Liz Williams had always loved math and science in high school. Her career went full circle when her previous employer, Snowy Hydro, gave her time off to pursue her teaching qualifications, allowing her to go into schools and encourage the next generation to embrace STEM.

She had been an engineer for more than 20 years, helped along the way by mentors.

"I love my job and I love what I do because I enjoy what I do," she said.

Graduate engineer Cynthia Copa, originally from Peru, studied at the Australian National University. She loved working on the real-world projects in her new job and her new country.

"Living in a developing country, [engineering] is obviously more male-dominated," she said.

"Coming to Australia, I was surprised, I thought there would be more women in engineering because there are more opportunities for women to do anything. But there is still a kind of a big gap."

Asset Informations Systems manager Katherine Walker said she had a science degree but diverted into information technology. It was a challenging and rewarding career because IT was an area always on the cusp of huge change.

She said her workplace operated on respect and that was a huge thing.

"I think it's really important everybody always feels like they can have those courageous discussions and that is the key thing that will change culture, particularly for women," she said. 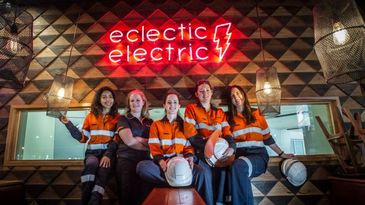