A New Zealand tech success story is committing to flexible working hours, because it’s good for their people and the business.

Xero provides accounting software to companies and people in more than 180 countries and has more than 1.38 million subscribers. It employs 2000 people worldwide, 38 per cent of whom have a regular flexible work arrangement.

In order to best serve its workforce, Xero has instituted a number of programmes which allow for flexible working and make employees happier at work and outside of it.

Xero has also introduced Activity Based Working (ABW) in Wellington, allowing individual teams to organise areas within the office to fit in with how they want to work, instead of giving each employee a desk in a fixed layout. This helps to meet the changing needs of staff as their activity at work changes. It also allows more employees to fit into a smaller space in a way which enables them to still work flexibly and productively and ensure collaboration across teams.

Perhaps the most significant initiatives are Xero Snooze and Xero Bounce. Snooze allows employees within the Customer Experience department to start 30 minutes either side of their start time, and finish either earlier or later at the end of the day. Bounce lets employees in the same department who wake up feeling unwell take a few hours extra rest to see if that will fix the issue. If not, they can stay home for the day. Both these initiatives work within an app developed for employees to let their managers or supervisors know where they are.

These initiatives were created by the Executive General Manager of Customer Success Nigel Piper, after feedback from employees in the support team that they wanted more flexibility. Following data-driven testing to see what was possible and what would work, the new policies were instituted across the Customer Experience department.

These flexible working initiatives have benefitted the organisation in a number of ways. Xero’s Employee Net Promoter Score, which measures employees’ engagement in the company, increased from 23 in January 2017 to 35 in January 2018. Employee happiness scores, which measure happiness at work as well as work-life balance, have also improved from 72 per cent to 77 per cent in the same period. The ability to offer flexible working has also allowed the company to attract high-quality talent.

At the end of 2017, a voluntary survey showed 38 per cent of staff have a regular flexible work arrangement, and 51 per cent used flexibility on an ad hoc basis. Sixty per cent said while they didn’t have a regular arrangement, they felt that they could make a request and their manager would give it full consideration.

One employee says, “There’s less pressure to travel to the office, allowing more time for exercise and time with the kids.” 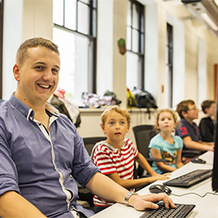