Stockland Managing Director and CEO, Mark Steinert, said he is delighted Stockland has been recognised for its consistent commitment to achieving gender equity for the fifth consecutive year.

“In 2018, we achieved a significant milestone in that every level of leadership from Manager through to our Executive Committee and Board had at least 40 per cent female representation, making Stockland one of the few companies that has achieved a gender-balanced workforce (40/40/20) across all levels of management.

“There is still more to be done, with leadership and accountability essential to shift the gender imbalances that still exist within Australian workplaces.

“Although we’re on the way to achieving our goal to achieve 50:50 gender equality in managerial roles by 2020,we can’t become complacent and we’re constantly looking at innovative ways to make Stockland a more inclusive place to work. Recently, we trialled a virtual reality tool that allowed employees to experience a scenario that showed leaders what it felt like to be excluded in a work environment.

“We’re also increasing investment in our future leaders to ensure we have gender balanced pipelines for senior leadership roles, through initiatives like our Senior Women’s Sponsorship Program that connects Executive Committee members with Stockland’s up and coming key and emerging female talent. This successful program has seen 50 per cent of participants promoted to more senior roles and almost 40 per cent of these to General Manager positions since in commenced in 2016.”

Stockland has achieved a gender pay equity ratio of 99.1 per cent for like for like roles, and in FY18, 45.1 per cent of women occupied management positions, with a goal to achieve 50:50 gender equality in managerial roles by 2020.

Workplace flexibility is a key enabler of attracting and retaining women in management and Stockland has a target of 80+ per cent return to work from parental leave which is consistently outperformed, with a 91 per cent return rate in FY18.

When recruiting new employees, Stockland conducts a ‘blind’ screening process to remove gender bias and has undergone analysis of job advertisements to ensure language used is gender neutral and inclusive and Gender Decoder is now a standard part of job advertisement practises.

“We have also had a strong focus on encouraging our male employees to take parental leave, with an increase of 47 per cent of men taking primary carers leave,” continued Mr Steinert.

“This not only helps fathers bond with their children and support their partners in their careers, but also helps them as managers who have team members with carer responsibilities and leads to a more balanced, engaged workforce overall.” 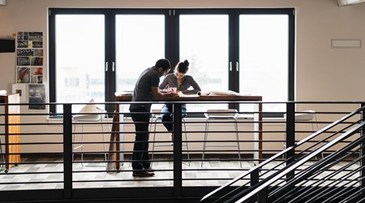