Captain Georgina Sutton vividly remembers the day, nearly 25 years ago, when she received a life-changing phone call from Qantas Airways, where she had lodged an application to be a pilot. She was in Port Augusta, South Australia, where she was piloting a Cessna 421 for a small regional airline, and the flight was delayed.

"It was pre-mobile phones, and I got a message to ring Qantas," Ms Sutton said. "I remember I came out and said [to the passengers afterwards], 'We are still delayed, but I've got a job with Qantas on the 747-400', which hadn't been introduced at that stage. It was a very exciting time."

She was hired in May 1989 to become a Sydney-based second officer on the jumbo jet, just five years after Qantas hired its first-ever female pilot and a decade after Ansett hired Deborah Lawrie as the first female pilot for a major Australian airline in 1979.

Ms Sutton, a 52-year-old keen waterskier, has now been promoted to the role of a Qantas 767 fleet captain. She oversees about 180 pilots, only 13 of whom are female. It is the highest position a female pilot has achieved at a major Australian airline.

"I think the women pilots within Qantas are very thrilled that I've been appointed to this role," Ms Sutton said. "I think it is also a very positive position for me to be in to act as a role model for them. It is something they can aspire to." 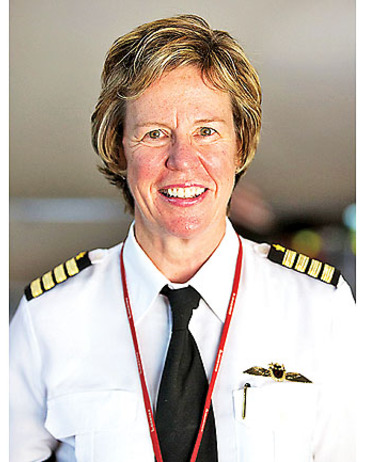